“Men’s natures are alike; it is their habits that separate them.” – Confucius

Habits decide whether or not a person achieves their goals. Too many people are nearsighted about the role of habits in their lives. Almost everything we do daily is governed by a series of habits or rituals that are invisible to us. It is when we examine our lives that we:

Have you ever consider self-publishing a book? Grab this FREE checklist and get started today!

Self-examination leads to habit ignition. It involves grabbing the reins on our habits and aligning them with our long term goals. Since habits require little thought or feeling, they are a great way to reach our goals with little effort once they are in place.

Just consider, if even one of these tips empowered you to remove one of your negative habits or to create a new positive habit, it would be worthwhile. This is something I need to work on daily. My biggest wins have come through the habits I set in place and, even better, the ones I have squelched.

“A usual way of behaving: something that a person does often in a regular and repeated way” – “Habit.” Merriam-Webster Dictionary.

There are several parts of this definition central to getting a grip on why we do what we do. A habit is a “usual way of behaving.” It isn’t something special we are doing, but a habit is the way we do things.

When we first smoked or bit our nails, it wasn’t usual and thus it wasn’t a habit at that point.

Something must have changed since that first time. The next key phrase is: “regular and repeated.” Our habits didn’t just fall out of the sky. They required practice and repetition.

One key difference between habits and rituals is whether they are formed internally or externally. Rituals are something from outside that you adopt and they become repetitive. Habits are something you do yourself and they form internally. However, there are plenty of exceptions to this distinction.

I will explore these two terms in the same way. Every habit happens because of internal and external forces and the same goes for rituals. It is useful to view the two in the same light because habits have a religious flavor to them. To overcome a habit or create a new one, we need to avoid underestimating its power.

Do They Have a Purpose?

Habits serve an important purpose. This is most visible when looking at two key attributes of habits:

Both characteristics serve an important role. The lack of emotion means we need not use emotional energy when performing a habit. The second attribute means we need not decide when carrying out the habit. Habits are all about energy conservation.

You might ask: What is the big deal about making decisions often? The issue is that making too many decisions causes us to run out of energy. This is called “decision fatigue” by social psychologist Roy F. Baumeister, Florida State University. Experimentation showed that “there is a finite store of mental energy for exerting self-control” – John Tierney. “Do You Suffer From Decision Fatigue?” New York Times.

Multiple conscious decisions are required for each new decision a person faces in life. The body can cope with this fatigue by limiting the total number of decisions it makes. It can avoid decision making by creating habits. These habits are safe since the person practicing them has done them before and survived.

There are several downsides to this “autopilot” way of doing things.

The first downside is that habits lack emotional appeal. This is visible for people who win the lottery and expect it to change their lives for the better. However, they adapt to the win and to having the money. Their lives fall into routine and the emotional pleasure from the win diminishes.

What’s worse is that our brains adapt to positive experiences much faster than negative ones. When something positive happens, we assume the sensation will last a long time. We build habits and normalize them. However, when we have a negative experience, we take much longer to normalize it. This unfortunate fact results in deprivation of pleasure and maximization of pain without any choices being made.

Another downside is how burdensome it is to change course. If the habit is negative, the body and mind will fight to keep that habit intact. The mind is trying to protect us from unnecessary decision making. Poor decisions may be safe in the short run, but they have long term consequences, which aren’t worth it. Thus, it is important to understand the nature of habits.

The Good, the Bad and the Neutral?

We repeat behavioral patterns over and over. The formation of these habits is unavoidable. We repeat the action a few times and the habit forms thereafter. They may include:

These habits are not necessarily good or bad. However, you need to realize that good and bad are relative to something. That something is a goal. If your goal is to live as long as you can, mirror the eating habits of people who live long lives by eating fish and rice and such. However, perhaps that isn’t your goal. You enjoy your red meat and don’t care if it means a shorter life. So it would be incorrect to say eating red meat is a harmful habit for you.

A better way to define a good habit is that it is something which moves you in your desired direction. Adverse habits are the exact opposite. In fact, every habit is moving you in one direction or the other. However, competing goals may create conflict as to whether a habit is good or bad. Let’s assume you have one goal of getting in shape and you have another goal of viewing season after season of your favorite Netflix show. Is watching the show a good habit or undesirable habit? It depends upon which goal has priority.

Sometimes it can be difficult to figure out whether a habit is good or undesirable. For our purposes, we don’t care. Habits which are difficult to classify should not be the focus of your efforts.

Often we assume our habits are visible and that we are aware of them. This is not true. We are unaware of hundreds and thousands of habits that control what we do and who we become.

People assume that they know their habits well. However, that isn’t always the case. We may know the visible ones:

As we noted in the definition of a habit, the thing a person is repeating may be a thought pattern. This is the most common habit and the least visible.

Habit blindness is the idea that we can easily see other people’s habits and patterns, but we are blind to our own. Many times this situation emerges when we find ourselves annoyed at another person’s behavior or speech. However, we may be guilty of the thing we dislike in the other person.

This blindness can be found in groups. People who form groups are often like one another. This prevents them from seeing which habits they, as a group, have in common.

Some say “birds of a feather flock together.” However, it may be more correct to say that the flocking causes “the birds” to change and alter habits until they match each other. Your habits will synchronize with those people around you, whether positive or negative.

Each of us is influenced by the habits of the people around us. Awareness of this should impact our choice of company, though this must be weighed in the balance of what our goals are and whether the habits we copy are positive or negative.

The Path of Progress

If we are to make progress in reaching our goals, we need both a list of our goals and a list of our habits. It is tempting to skip the mapping out phase (self-examination) and jump to eliminating destructive habits. That is a huge mistake since not every habit prevents achieving our long term goals. For more information on mapping out your goals see my book Achieve Your Goals Now With PowerLists™ where I explain step by step how to determine the goals that are right for you.

The SOARR method can be very effective when identifying harmful habits and eliminating them. This method involves “5 Powerful Steps to Reprogram Your Brain to Ditch Bad Habits.” The Healthy and Natural World.

“STOP and observe your thoughts. How do they affect your mood?”

A good starting point for dealing with a possible unhealthy habit is to stop everything and look at our thoughts. The thoughts affecting mood are the ones that help us detect negative habits.

“OBSERVE your perspective on the habit and why it makes you feel a particular way.”

The next step is to understand how we perceive a habit and how it makes us feel. If our habit is smoking, we need to look at how we feel about that habit. Maybe it is the cost of cigarettes which will have a huge impact, or perhaps it is the health issue associated with smoking which makes us feel bad. If we don’t have a negative feeling associated with a habit, then it will be difficult for us to eliminate it.

“ASK yourself who you could talk to that is reliable and knowledgeable.”

The ask step is having someone else look at our situation and tell us what is happening in their opinion. We are too close to ourselves to see many of the habits that govern how we live our lives.

The hard part is finding someone who will be honest. A close friend should be honest with you. If not, you can pay a therapist to help you uncover the nature of your habits and what you should do about them.

“REFRAME the way you look at things; seek a perspective other than your own.”

“RESPOND to the habit in a way that will benefit you and the people around you.”

This step is key. It is the starting point where we decide we will respond to a habit. Later steps will get us closer to dealing with the habit.

The SOARR method puts us in a great position to decide where we should go from here. This method is a fantastic way to:

Habit Ignition: 41 Steps to Unlocking the Secret Power of Habits and Rituals for Life Book 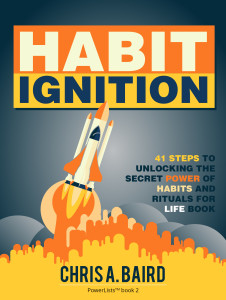 Have you considered trying self-publishing? Check out this article to get started right away: https://selfpublishingmadeeasynow.com/11-top-reasons-you-should-be-self-publishing-on-kindle-to-make-money-online/

Get the latest free offers on new books here.